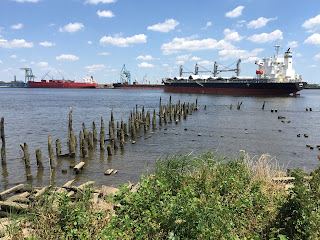 Yesterday under a beautiful blue June sky a few members of the PPAP painted along the Delaware River at the historic Pier 53 at the invitation of Susan McAninley and the The Friends Group of the Washington Avenue Green. The Pier, along with nearby piers, has a major historical significance, is a fish nursery, is part of the Mid-Atlantic flyway for migrating birds, and is an ecological study area. It also has great views of the river, shipping and beautiful Camden. 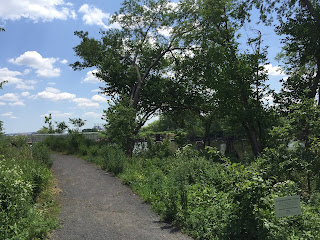 It was a great day for painting, if a bit hot by noon with temps at 90 according to the thermometer in the dash of my car. I packed my Julian Umbrella for the paint-out as I know how tough the sun can be while painting if shade isn't good or available. A few years back when I was really starting to do a lot of plein air I painted near Delaware one summers day, much like yesterday, and I went sun blind and was really wiped out from the heat. I realized then why I always saw pictures of painters with Umbrellas, sometimes more than one. 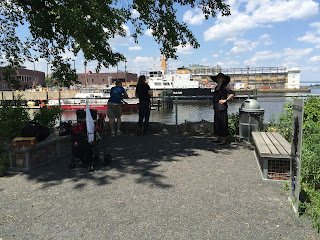 My buddy Will and I arrived at the pier about 12 or so and met Susan who gave us a tour of the Green and Pier 53 and we hunted for views to paint, We were soon joined by Dave and Diane and set up to work as we had reached solar noon. There are many, many great views to paint here and I will certainly go back a few more times to paint. 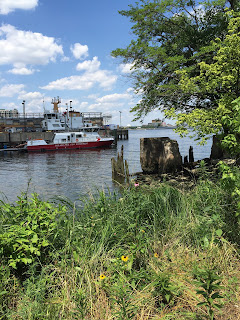 There are not many spots to paint along the river in Philly, access is limited or frankly dangerous and some places like Penn Treaty Park where I first painted with my original group the Dirty Palette Club is way too buys with people on the weekends, as well as a lot of drunks--and drunks love painters! Boy, they love to tell you about their lives and the merits of your efforts and painting theory. You can read about my previous adventures as a painter with the DPC on our blog. http://thedirtypaletteclub.blogspot.com/2012/05/return-to-delaware.html
http://thedirtypaletteclub.blogspot.com/2012/04/painting-delaware.html 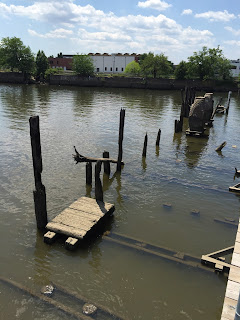 Checking the angle of the sun I choose a view where the light would stay pretty much the same till I was done, so I was facing south. There were other great views but I was too late in the day to paint them and the shadows would reverse too soon to get anything done. A little while later we were joined by Susan's husband Frank, who brought the pizza and water! How great is that, a great place to paint and you get feed as well! 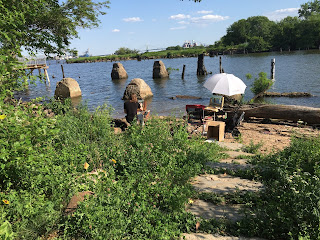 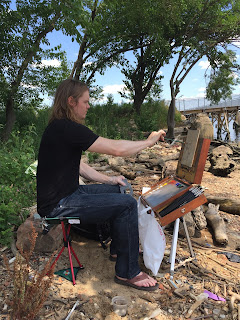 Will blocking in his painting

I got to painting and took a few breaks to talk with Franks and Susan who grew up nearby in South Philly and they told us many great bits of trivia and history about the area and the pier as a way station for Civil War troops and emigration into the US. In fact many of the families in Philly have great grand parents who came in and settled a stones throw away in South Philly. 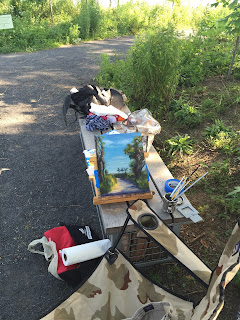 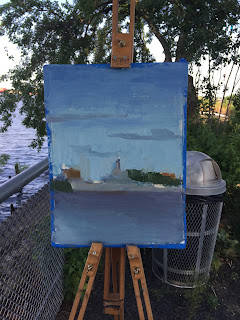 Dave's painting of the USS New Jersey in progress

There was just a little breeze even though the sun was blazing and soon the tide started coming in as Will and I painted. I used a 12 x 16 Ampersand Gessoboard and no Liquin, just a little terps as it was so hot the oil was setting up fast. It was so great to get out of the studio and a break from the comic strips and listen to the river wash up and the sounds of nature. 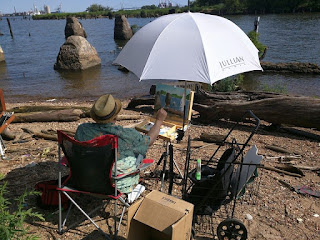 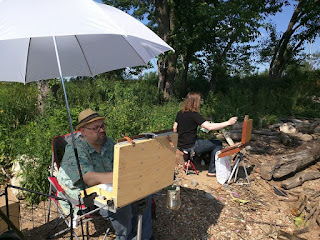 Will and I baking in the heat 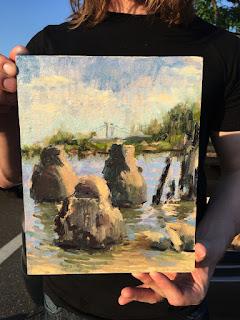 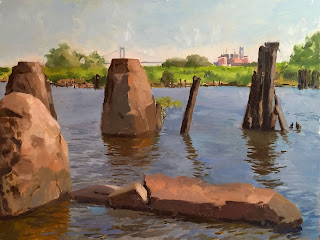 
Its very quite and tranquil there in the Green with a few runners, dog walkers and people strolling in and they keep it pretty clean, especially for trashy Philly. The group has done an amazing job rehabilitating this area and its quite a gem hidden away in South Philly. I really recommend everyone go there and check out how beautiful and peaceful this little bit of "hidden Philly" can be. 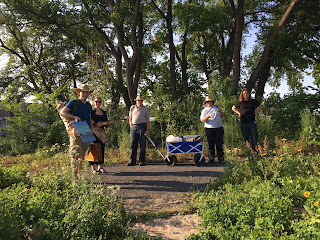 Around 5-ish we were done and headed home. A big thanks to Susan and Frank and the Friends Group for hosting us to paint and we'll be back soon to paint the Green!
Posted by Mike Manley at 12:06 PM

We are a group of local painters in the Philadelphia area who are drawn together through our love of painting in the Plein Air tradition out and about in the greater Philly and North East Corridor. Urban, suburban, seaside or country--everything is a subject for our brushes and palettes.