Cloudy With a Chance of Swedish Meatballs 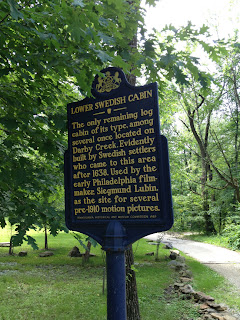 Yesterday the PPAP got back out to paint--this time in a cool "Hidden Philadelphia" spot about 12 minutes from my house in Upper Darby called the Lower Swedish Cabin. I've lived in Philly for almost 30 years and never heard of it! Alina found it on one of her runs, and it a great find!

Here are a couple of cool panoramic views of the area and cabin. I love the old ruined cabin and want to paint that next time.

This was my second day in a row  getting out to paint and it was awesome.  Aaron Thompson came back to join Will and Alina and myself as we raced the incoming rain. The radar showed the line of showers approaching from the west just before I left the house so I figured at anytime we could get a downpour but we lucked out until just the very end. Initially it was really nice and sunny, but in about 30 minutes the sun was gone and the light was the cool overcast for the remainder of the painting day. 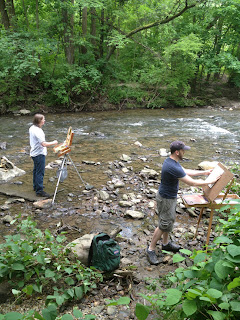 Will and Aaron set up down in the river to get great views for their paintings. I need to get a pair of waders! 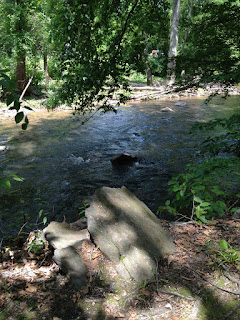 There were so many great spots to paint and I will come back to spots like this. 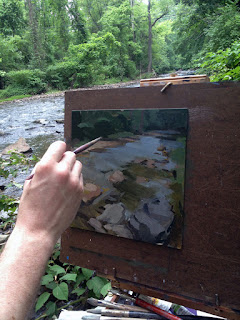 A close-up of Aaron painting 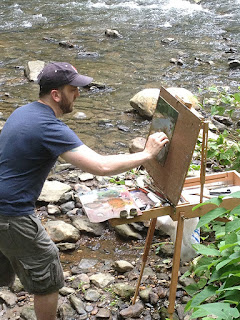 Arron really working on those rocks 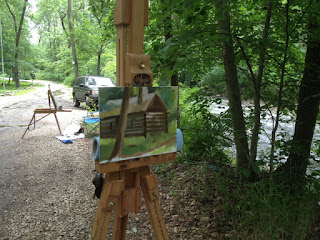 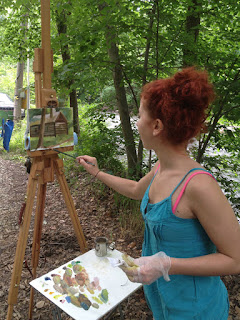 Alina working away as you can see the sun going away and the light changing. The good thing about overcast days are the light does stay a lot more consistant. 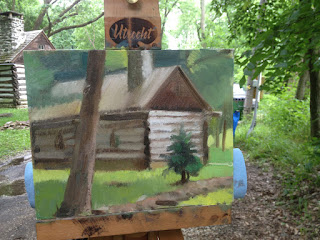 Here is Alina's final painting which reminds me very much of something by Manet in her paint application. below you can see Will's final painting, very tonalist in approach. 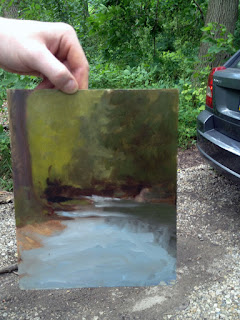 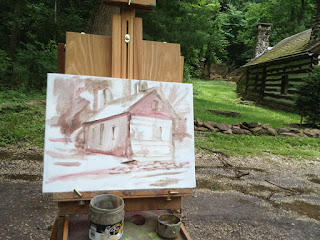 Here is my block-in for the cabin, I figured using a red-ish bock-in would look good if any of the under painting showed through under the green. The main goal was to set the tonal atmosphere, the "color of the soup" and then work into that. 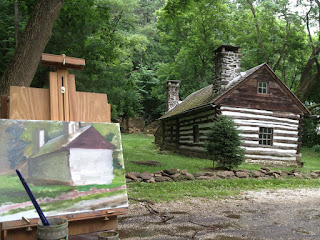 Here is a shot of my blocking. I continued to adjust as the light really changed quite a bit from some sun to completely cloudy about halfway through the mass-in and that started to change values and temperatures. The sticky spot was the reflected light on the cabin which I had to darker a lot more. It was a lot of squinting going on the whole day... 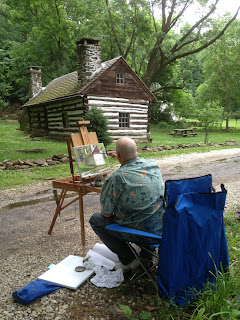 Alina took a snap of me starting me working away while hoping the rain would hold off. 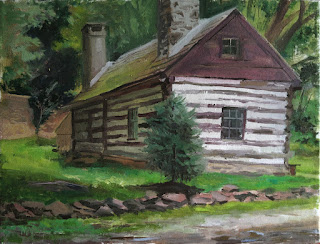 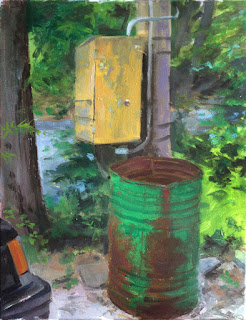 I searched around a bit for a spot for my second painting since Aaron was still down in the river working, but I could tell we didn't have much time till it started raining as it was getting darker and I could feel the temperature  dropping and the wind started picking up as the thunderstorms were approaching from the west. I was captivated by the trashcan by my jeep, there play of the rust against the greens and the old call box of some kind was just the thing---so I blasted this out in about 30-45 minutes using my biggest brush. My palette was super chunky and tacky from using the Liquin, I put the finishing touches on it as it started to rain pretty good, so Aaron packed it off to grab a few beers and eat some great Tia food at the Piggy Cafe. I plan to get back out by mid-week weather allowing.

We are a group of local painters in the Philadelphia area who are drawn together through our love of painting in the Plein Air tradition out and about in the greater Philly and North East Corridor. Urban, suburban, seaside or country--everything is a subject for our brushes and palettes.